Warning: Invalid argument supplied for foreach() in /home/bm3co/public_html/site/assets/cache/FileCompiler/site/templates/news-overview.php on line 15 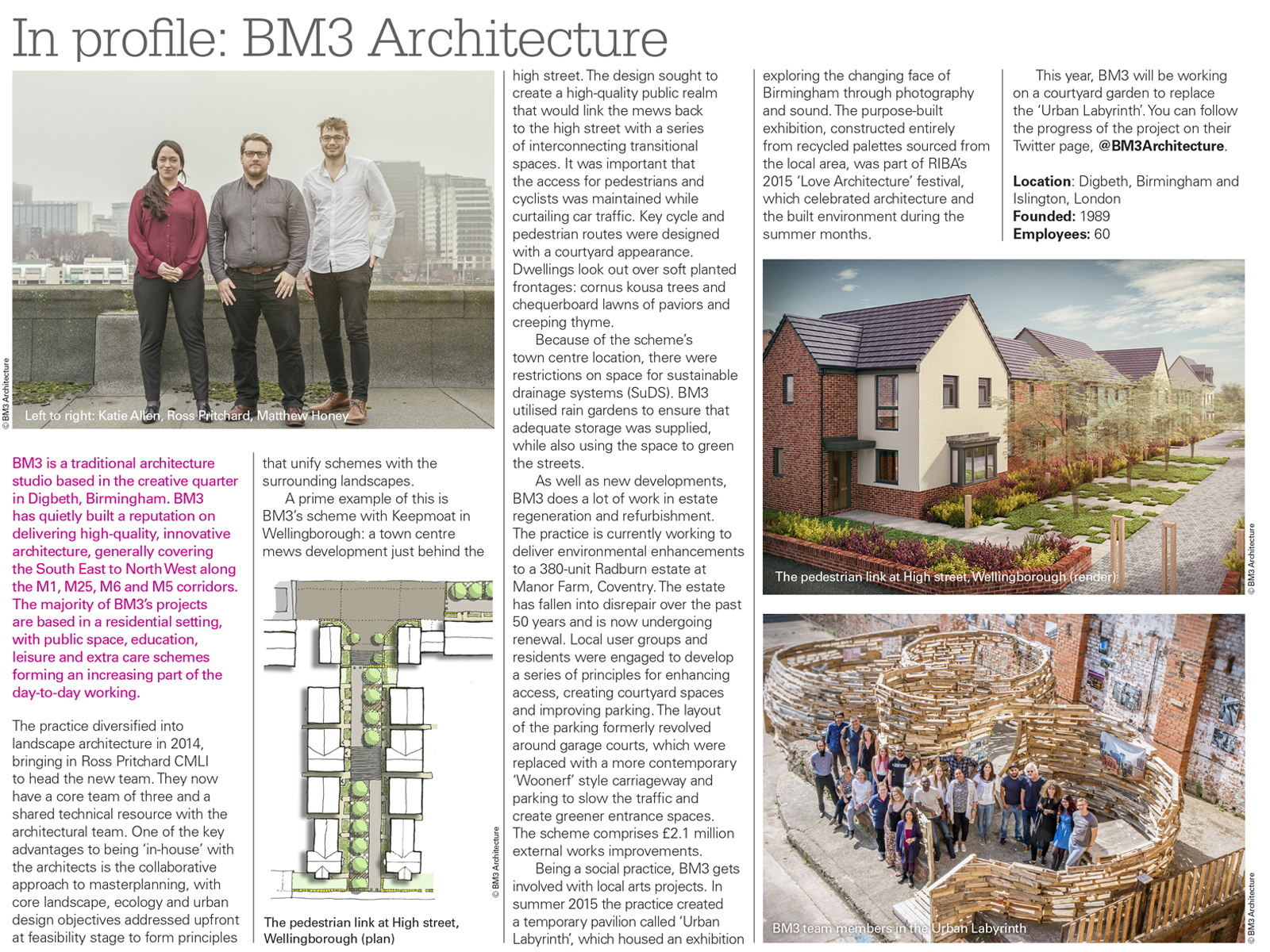 Since 2014 BM3 has been a Landscape Institute Registered Practice. The team is led by Ross Pritchard and we are confident that we can meet our client’s expectations for fully integrated landscape design as part of their developments. 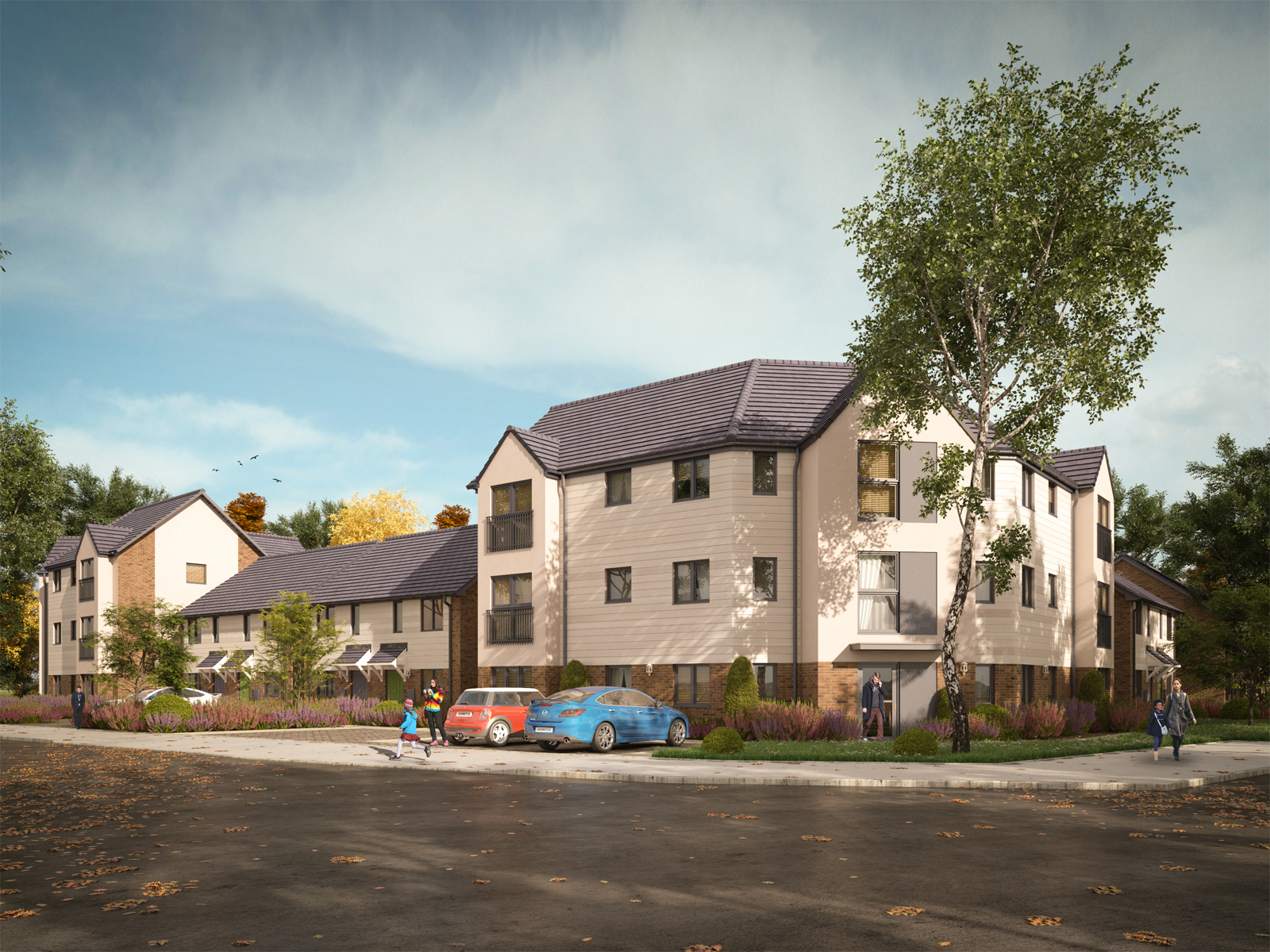 We have submitted a planning application to Birmingham City Council for a residential development in Cooks Lane, Tile Cross.

Working with Westleigh Partnerships Ltd we have designed 46 contemporary and sustainable living homes comprising of 2 and 3 storey flats. 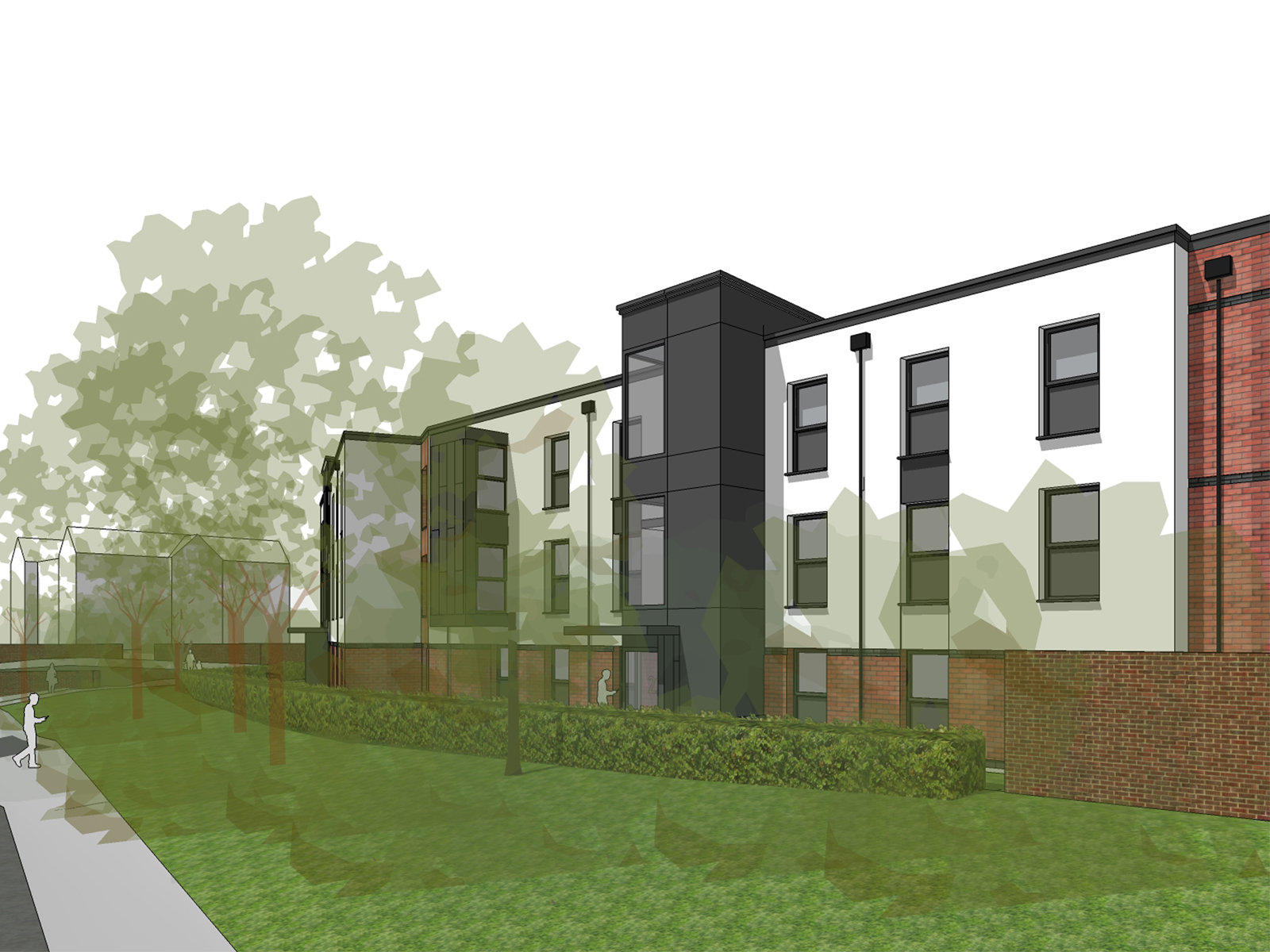 We have gained planning permission for Student Accommodation in Selly Oak, Birmingham.

BM3 Architecture have worked with Markey Construction to design 48 new build student dwellings on the site of a former office block. The scheme is comprised of 13no. 1Bed Studio Flats and 35no. 1Bed Cluster Flats. 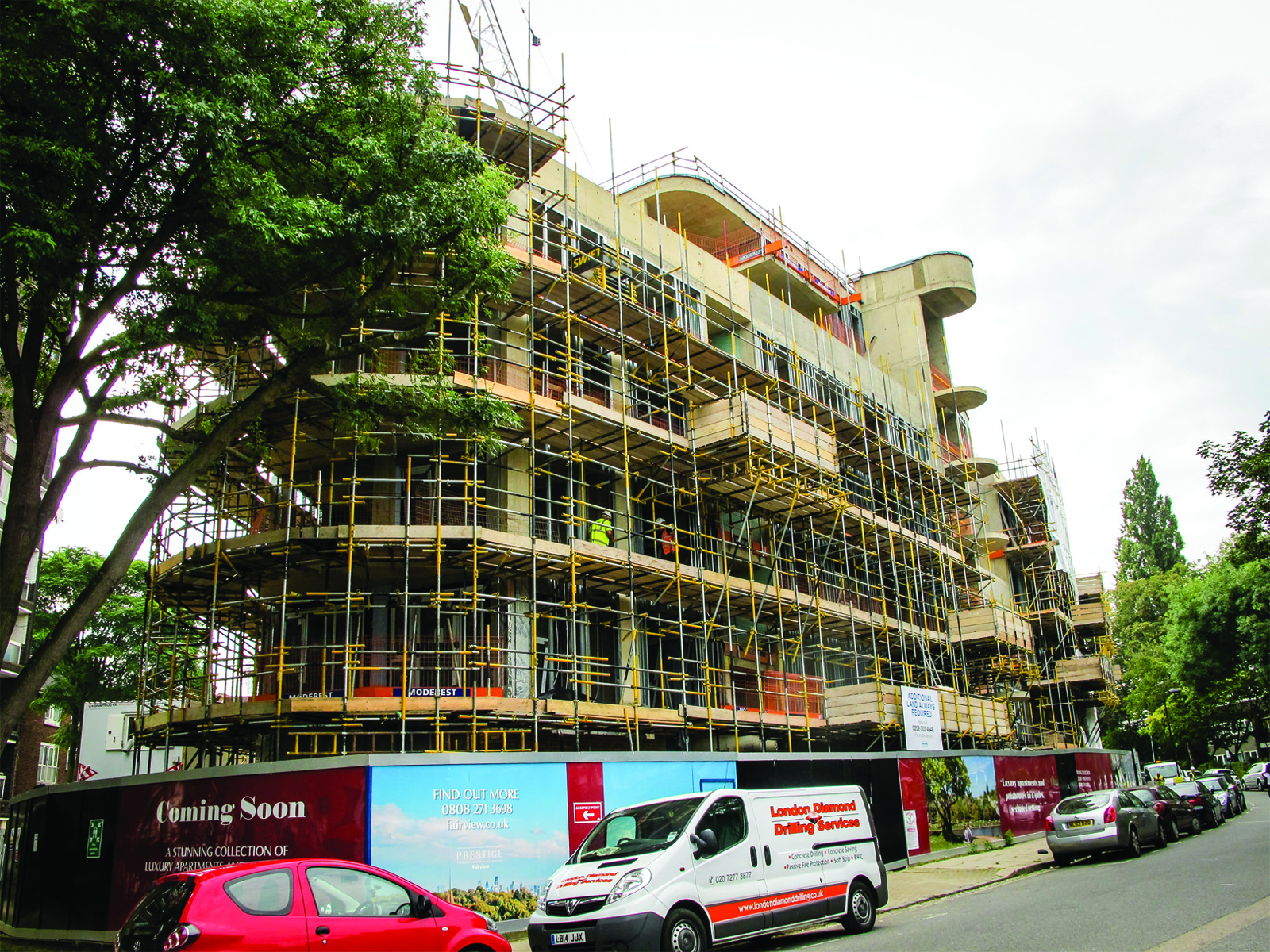 Located just a few minutes walk from Belsize Tube station, this development benefits from a prestigious London postcode. It is also located near to the 1934 landmark Wells Coates grade I-listed Isokon building, which is evident in the design of this new block of apartments.

BM3 was appointed by Fairview New Homes to carry out the detailed design of the building, and also act as lead consultant on the project. The building is due for completion in 2017. 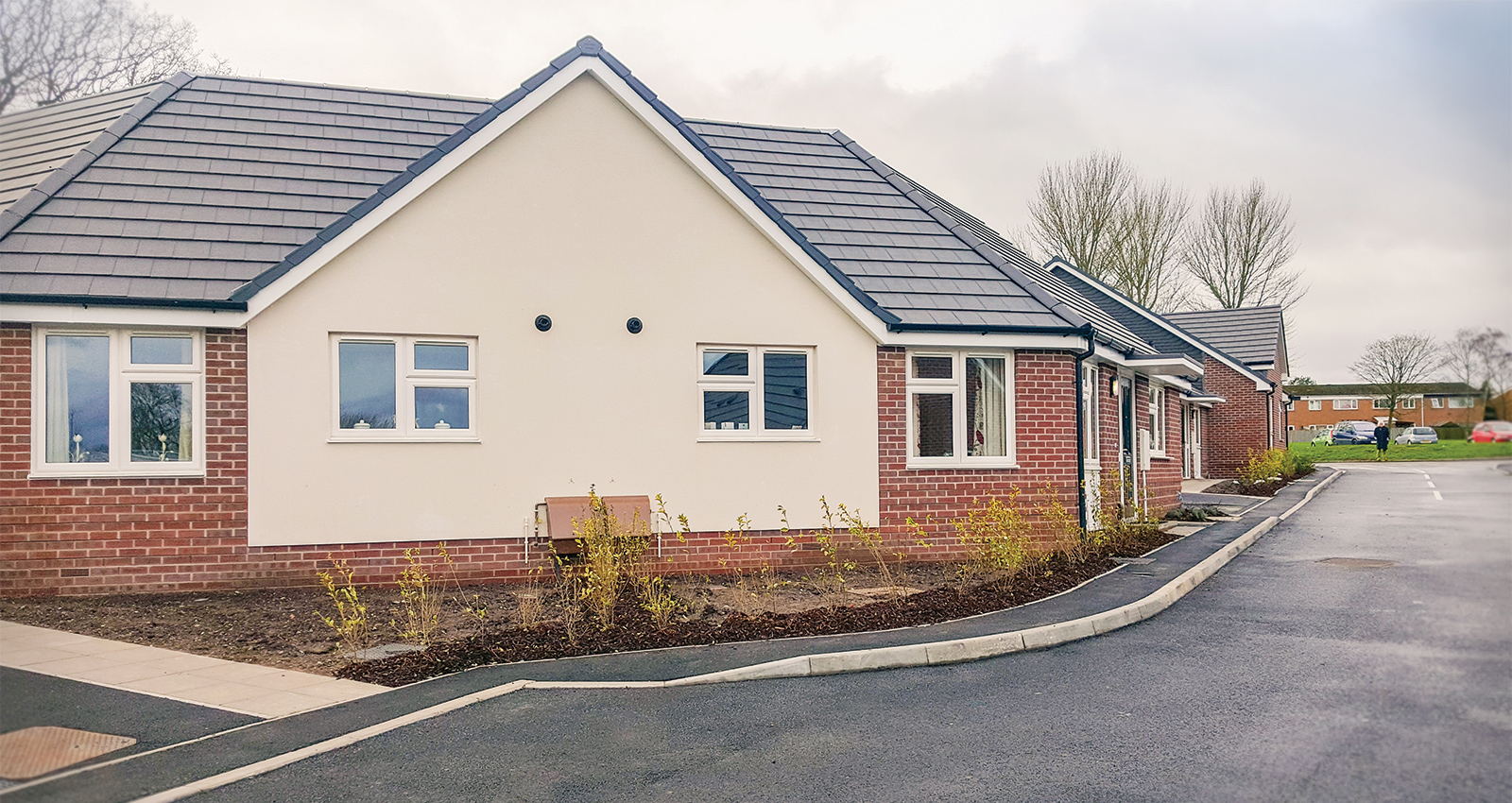 We’ve received another Highly Commended mention for one of our schemes! 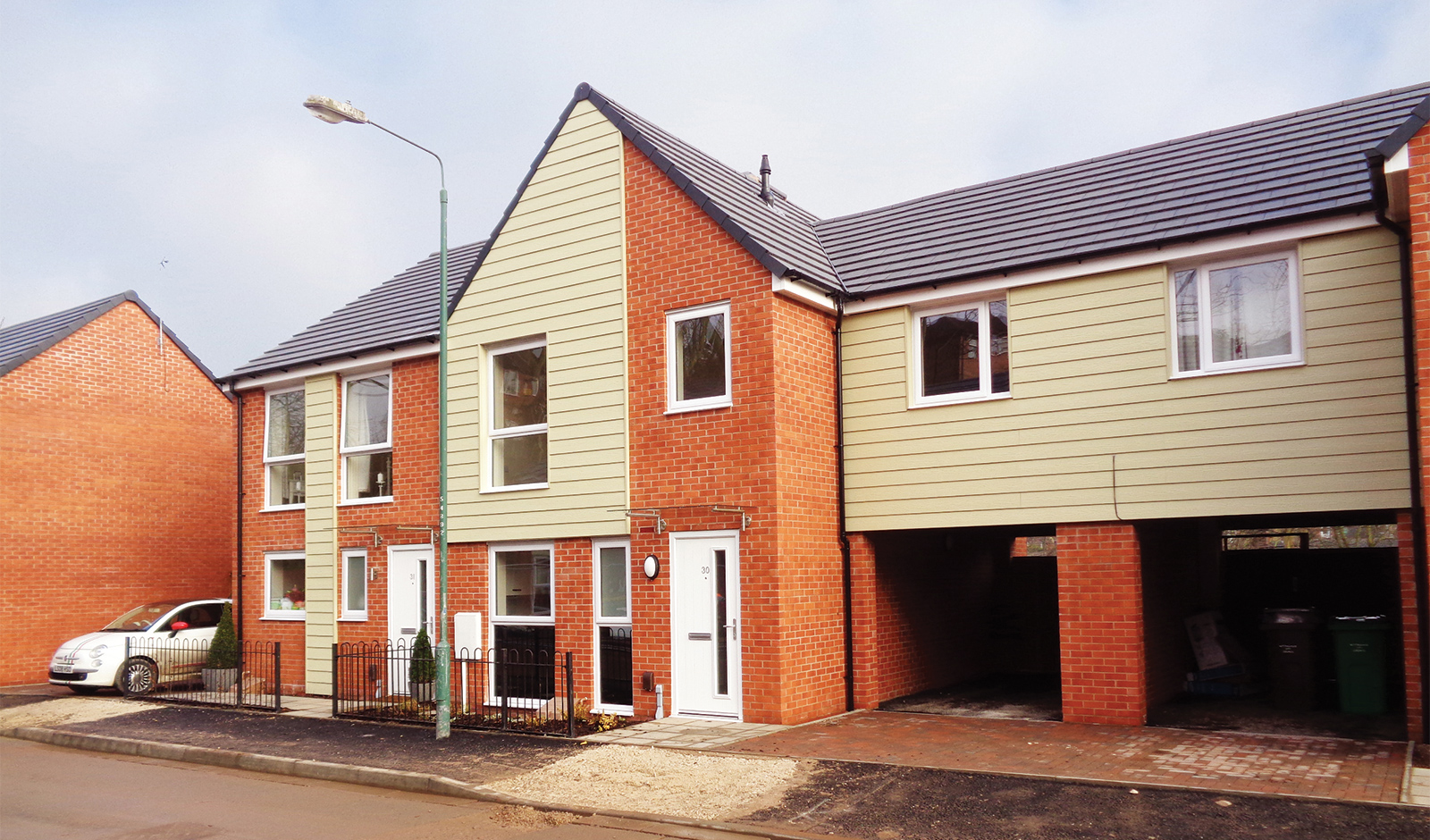 The awards recognise excellence across all types of building projects from residential extensions to public service buildings and also recognise individual site agents for their efforts.

The scheme which we have designed on behalf of Keepmoat Homes for Nottingham City Council was recognised in the category ‘Best High Volume Housing Development’ at this years awards.

The resedential development which is located 1.5km from Nottingham City Cent re is made up of 70 mixed tenure dwellings ranging from 1 to 4 bedrooms and includes a community childrens playground with a commemorative memorial celebrating the history of the area.

We have been granted planning permission for our mixed tenure development at Thornton Road, Stanney, Ellesmere Port.

The scheme which we have designed for Linden Homes, part of the Galliford Try Group, is comprised of 141 homes, 96 for the open market and 45 for affordable rent.

The development, which consists of a mixture of 1 bedroom flats and 2, 3 and 4 bedroom houses is located on the outskirts of Stanney, Ellesmere Port. The 4.43ha site was formally a Greyhound racing stadium constructed in the 1980’s. The surrounding area is mainly housing and light industry with woodland to the south east and good transport links provided by the M53 to the north east.

As part of the development of the site Linden Homes have made a financial contribution in order to relocate a sports pitch.

An area of open outside space with a childrens play area has been included in the design of the development allowing people of all ages to enjoy the space. The scheme has been designed with a distinctive character that still respects the surrounding area. 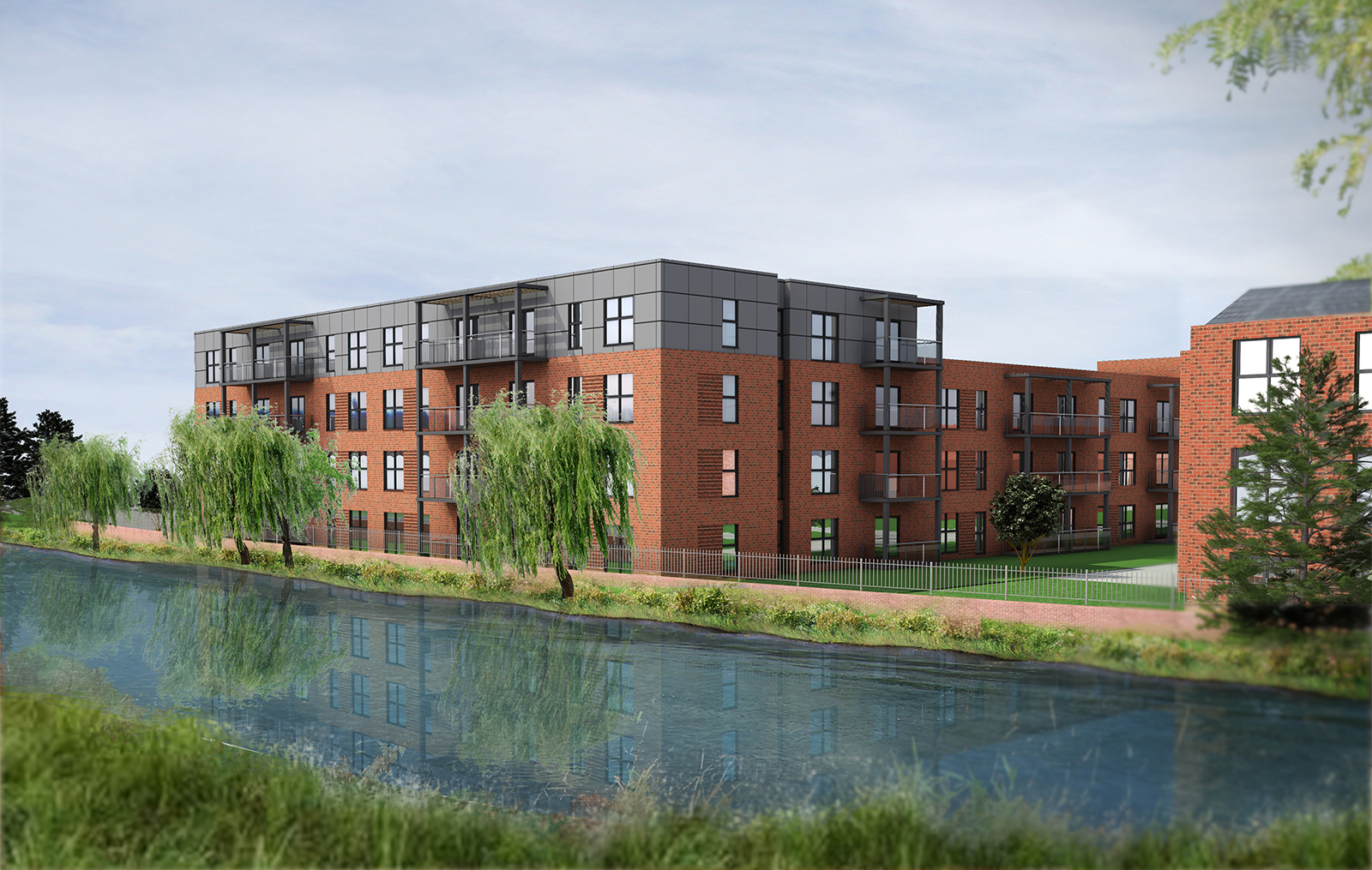 Work has started on site at our development at Carl Street, Bloxwich, Walsall.

Working with Kier Living Limited on behalf of Walsall Housing Group we have designed a 4 storey development for the over 55’s comprising of 1 and 2 bedroom apartments all benefiting from external space, such as patios or balconies that provide seating and landscaping space . As well as the 66 apartments, the scheme also includes a communal small kitchen, meeting room and wellbeing space available to the residents. The ‘U’ shape design allows for a central, private internal courtyard for the residents that provides seating, lanscaping and a café area.

The development of 66 units is being built on a 0.6hectar site approximately 1.5 miles from Walsall city centre that previously lay vacant and overgrown. Located alongside a canal the 4 storey apartment block will allow residents to benefit from canal side views whilst the close proximitey of good transport links will promote both walking and the use of public transport. Currently, buildings in the surrounding vacinity range in materials however brick and render are predominant and so it is hoped that the new scheme will bring a distinctive character to the immediate area.

The scheme is designed to be used safely and easily by many different people including those with differing disabilities, elderly residents and the parents and guardians of young children and should be complete for Spring 2017.

Rochdale Sites Are Given the Go Ahead

BM3 working with Galliford Try Partnerships have gained planning consent to deliver two residential developments in Rochdale on behalf of housing provider The Guinness Partnership. Both schemes will address with lack of affordable homes in the area and it is hoped that the developments will act as a catalyst for future regeneration.

The first scheme located on Mary Street, Heywood will deliver 65 houses across a three acre site. The land was formally a distribution warehouse and car park for Boots but is currently vacant having beenpreviously cleared by Rochdale Borough Council. The development of two and three bedroom properties offers 37 units for affordable rent and 28 units for private sale and is ideally located in a mixed area of residential, light industrial and community use, within Heywood town centre.

The second scheme focuses soleley on Rochdales need for more affordable homes. Split across three smaller sites, the development at Milnrow Road, Newbold will deliver a mixture of 37 two, three and four bedroom properties on the site of former lowrise flats which have previously been demolished by the council.

Work on site will commence in the early summer with private sale homes being available from Galliford Try Partnership’s Linden Homes from spring 2017. 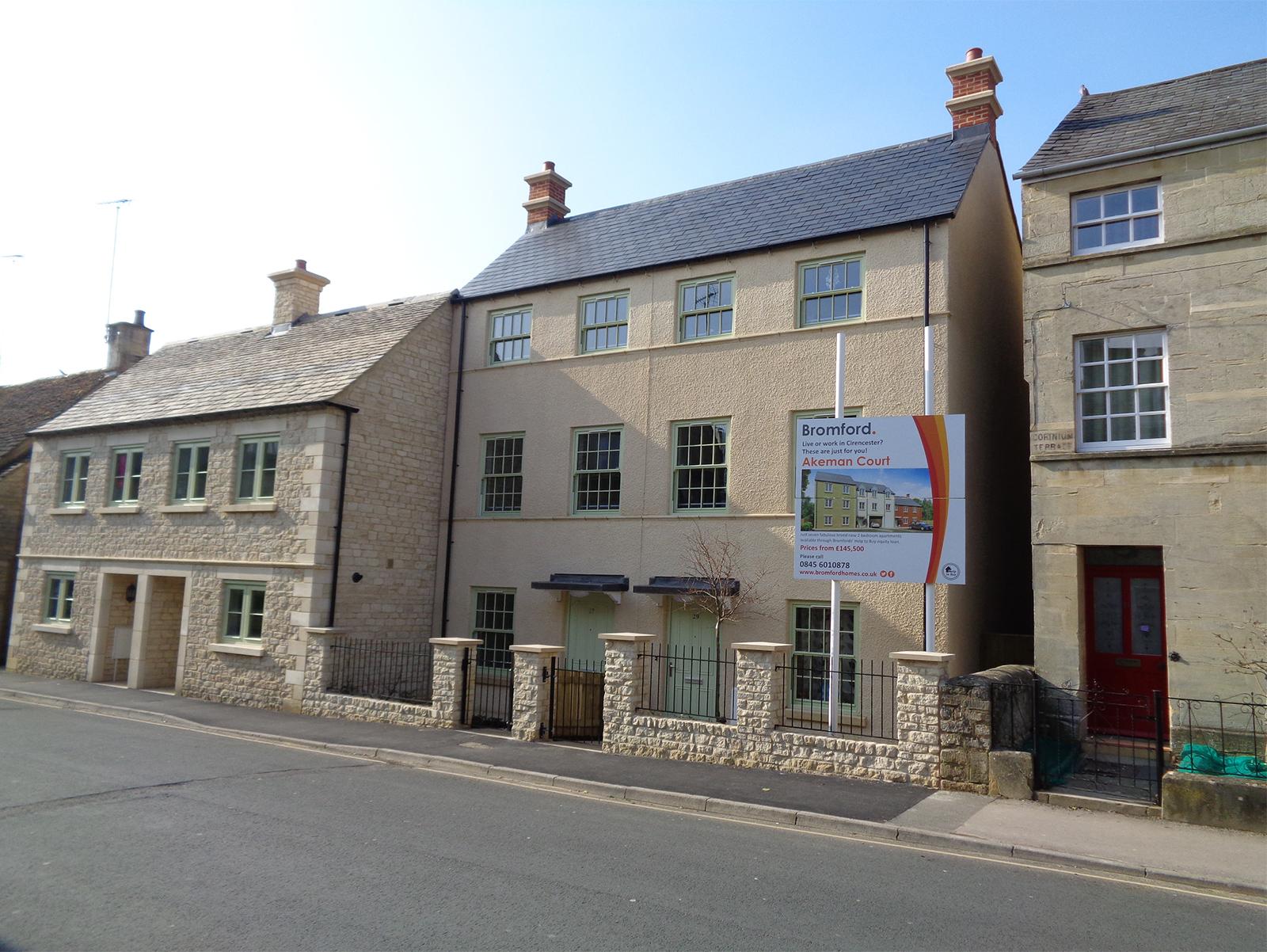 BM3 is proud to announce that we have won the Cirencester Civic Society Architectural Award for our scheme at Akeman Court, Lewis Lane, Cirencester.

The proposal was to replace an existing, run down sheltered housing scheme for the elderly and to provide a new, affordable housing scheme, enhancing the area.

The site now offers thirteen units, a mixture of two bedroom flats and three and four bedroom family homes with associated landscaping and parking. The ‘Cotswold Design Guide’ was used to ensure that the new scheme reflected the aesthetics of the surrounding buildings and was made up of sustainable, well designed, attractive houses and flats.

We worked with Carter Construction and Bromford Housing Association Ltd to deliver the scheme which has received praise from residents around the town since its completion. 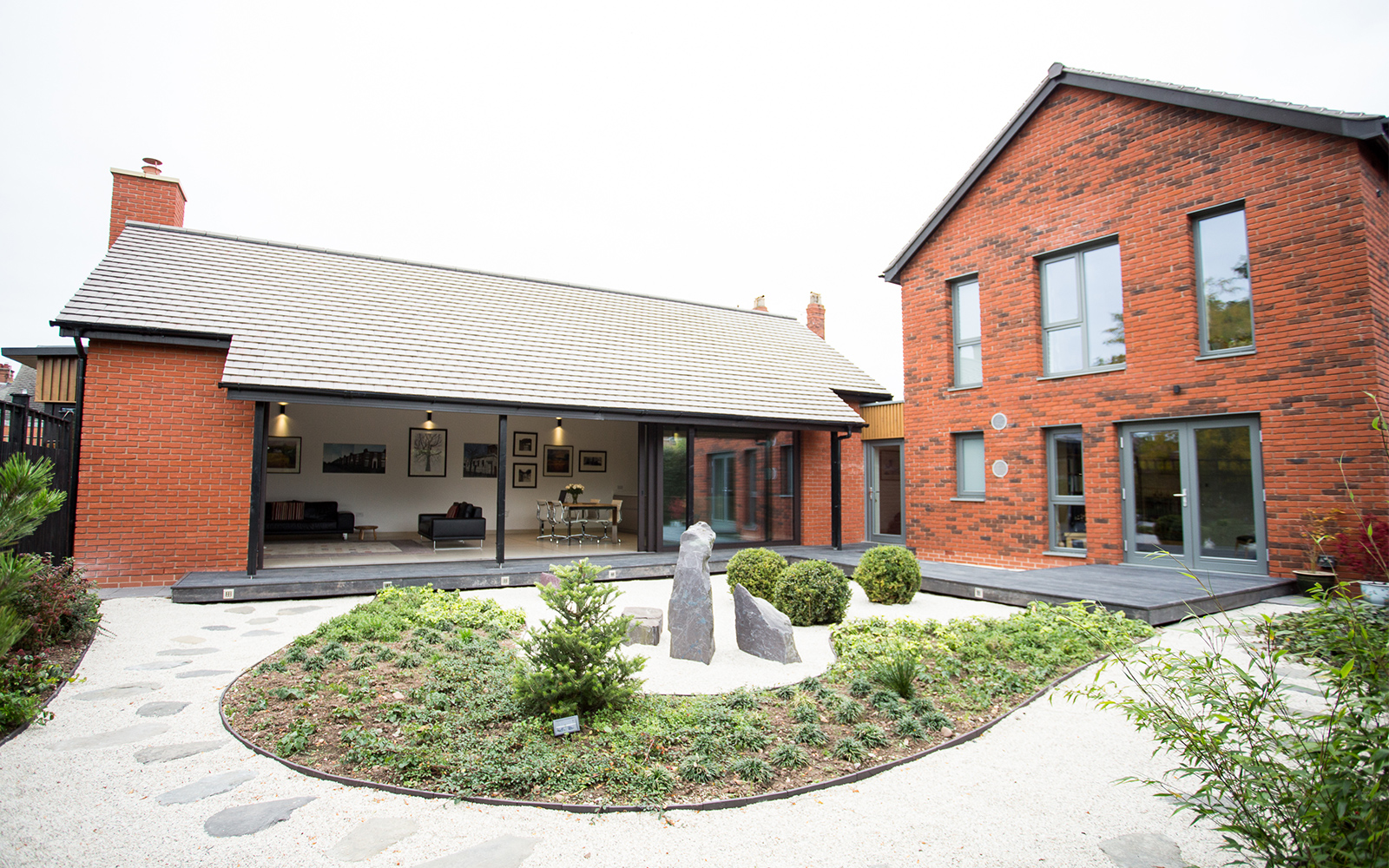 The low energy house built by BM3 Director Ian Foden last year is proving its worth during the first spell of cold weather this winter. The house which features a number of low energy technologies, very high levels of air tightness and excellent insulation values needs a very low level of heat input. Ian said "We are getting good solar gains from the large area of south facing triple glazing in the house, and heat losses are low. We are getting by with minimal heating from the air source heat pump". Annual space heating and hot water bills are expected to be below £400 per year. 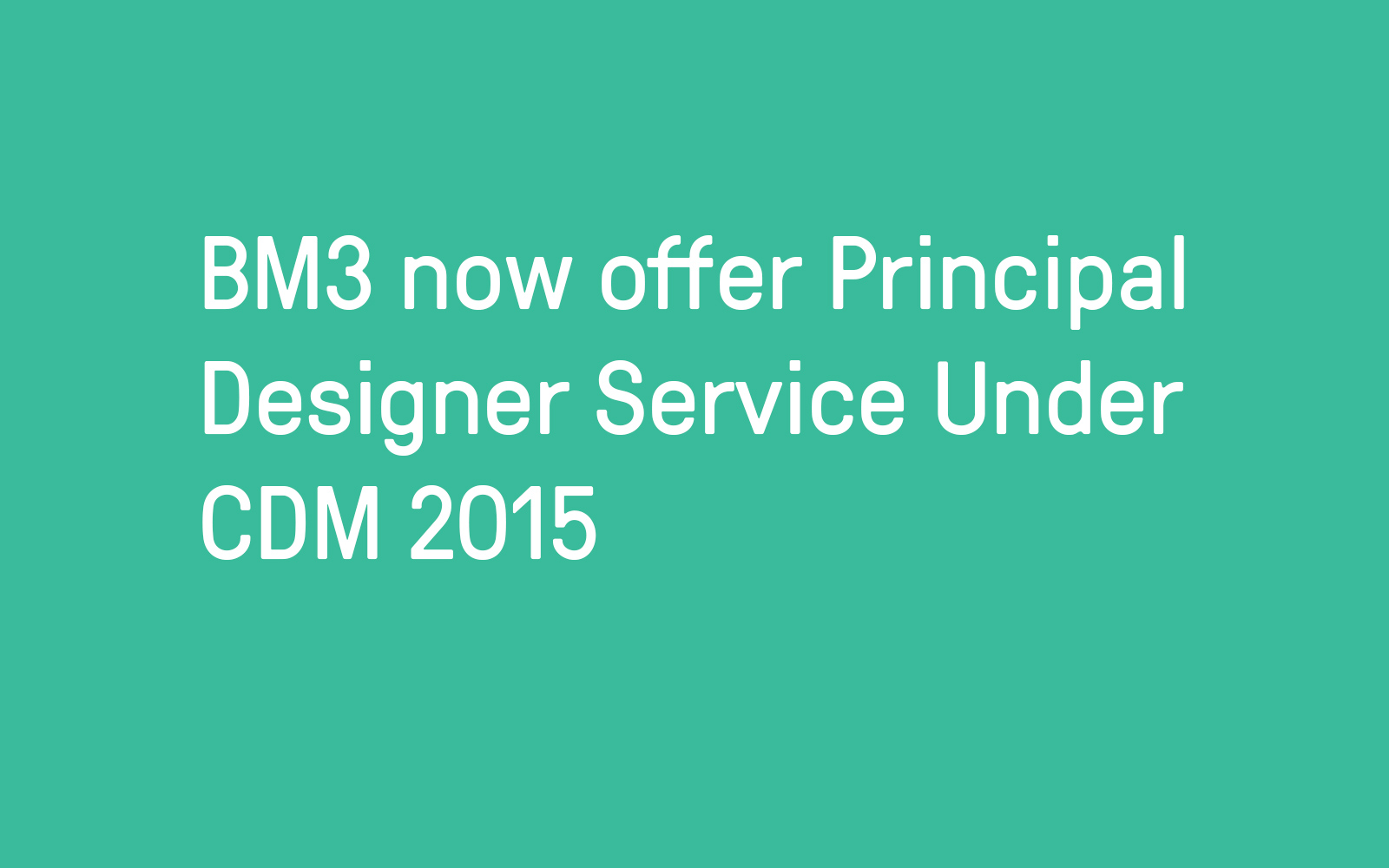 Following a period of training BM3 staff are up to speed with CDM2015 and can act as Principal Designer helping clients to fulfil their duties under the revised Regulations. 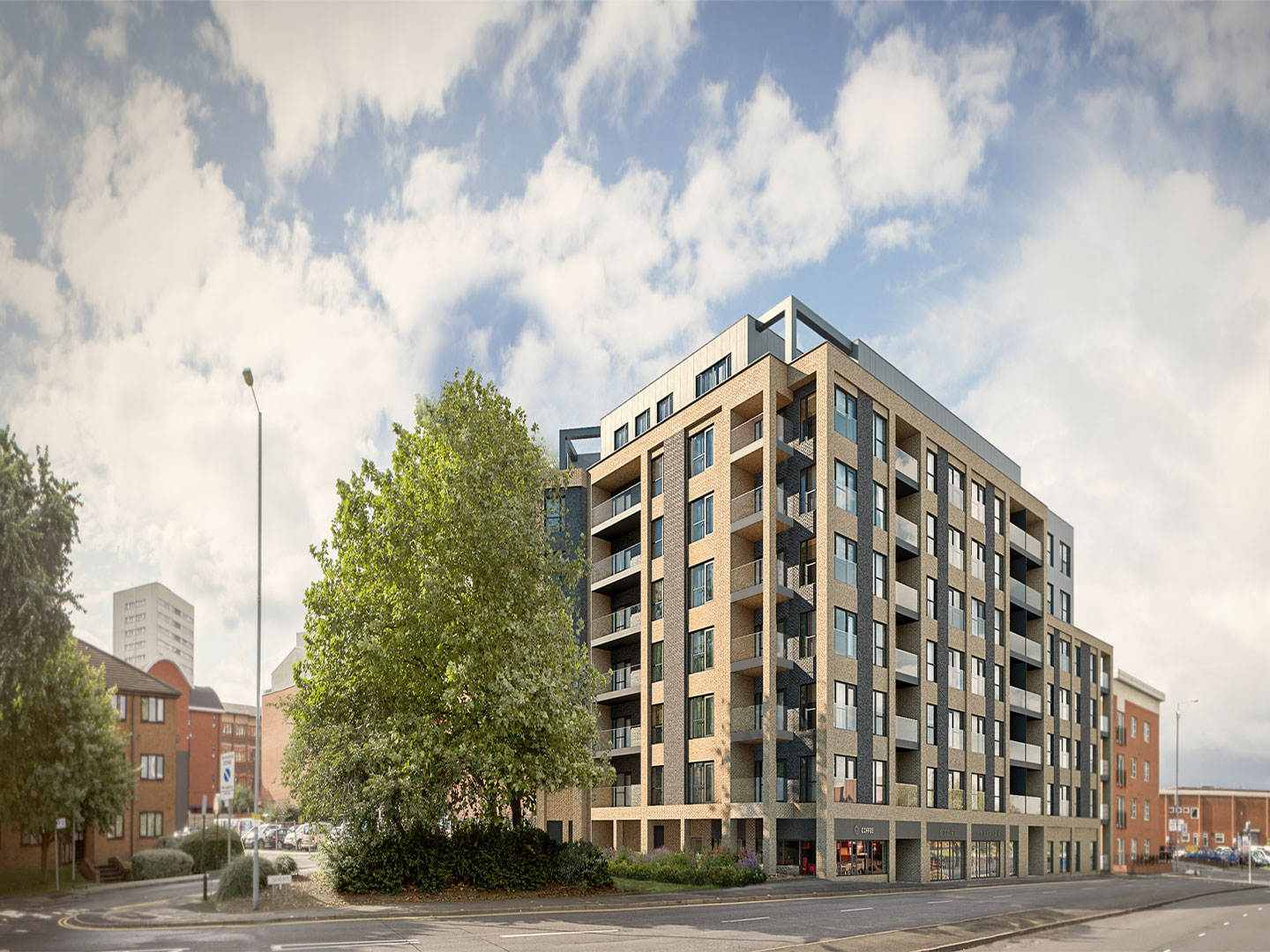 The proposal for Regency Place combines 82 flats with 295m2 of commercial space on the ground floor level with associated parking.

The scheme has been designed to maximise the 0.16 ha brownfield site which is currently being used as a car park. A key aim of the development is to improve the quality of housing within the limits of the city centre, with specific attention to Birmingham City Council’s aspiration to raise the general standard of buildings around the City Centre to achieve the highest levels of design. 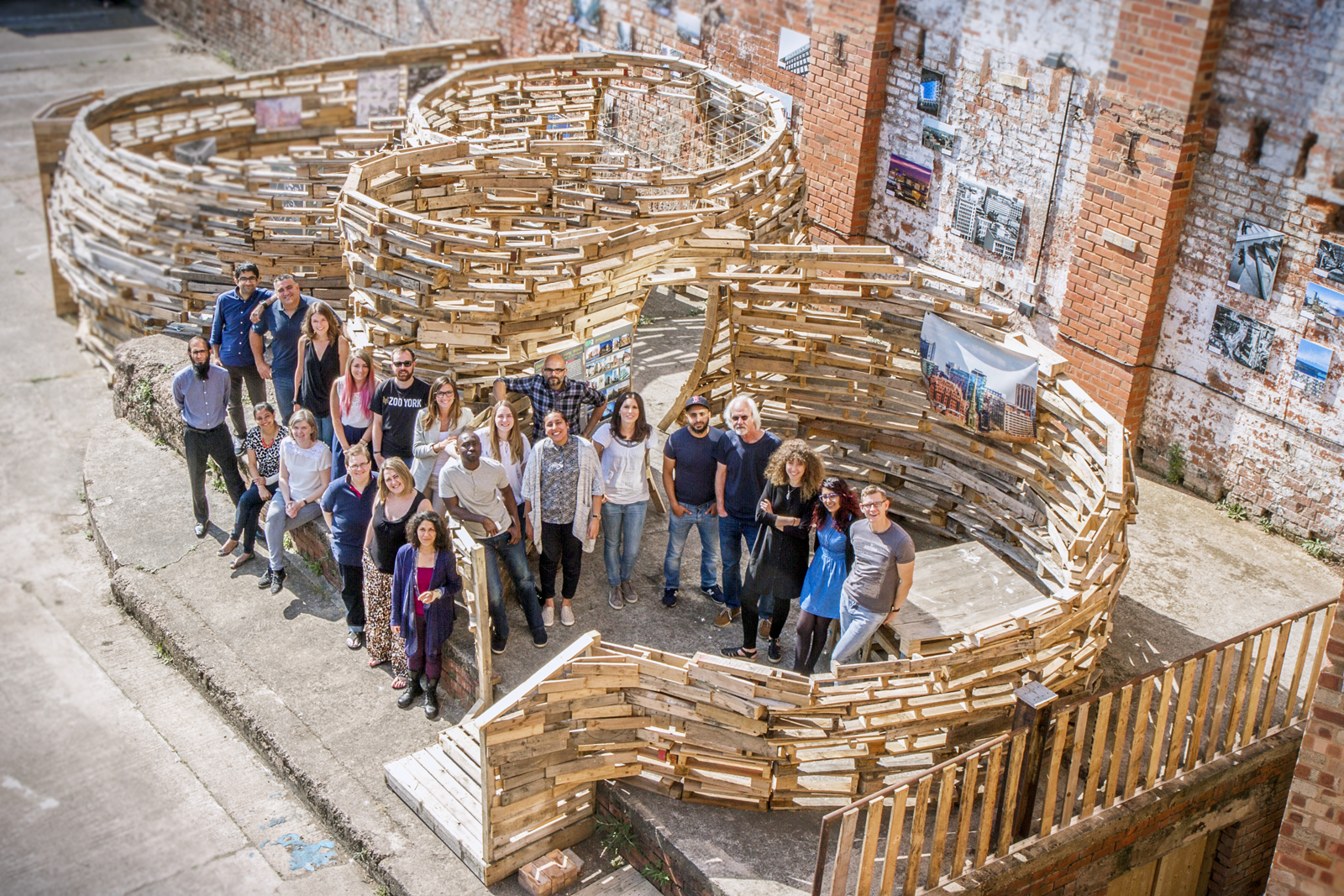 If you found yourself in Digbeth during July then you may have stumbled upon BM3 Architectures ‘Urban Labyrinth’, an exhibition exploring the changing face of Birmingham through photography and sound.

The purpose built exhibition, constructed entirely from recycled palettes sourced from the local area was part of the RIBAs 2015 ‘Love Architecture’ festival which celebrates architecture and the built environment throughout the summer with events to inspire those of all ages.

The team at BM3 designed and constructed a pallet pavilion in the yard of their Birmingham head office. The Urban Labyrinth structure was inspired by a quote from Architect Glen Murcutt who said that buildings should aim to ‘touch the ground lightly’; this led to the adaptable, temporary and light weight structure causing little interruption to the surrounding area. The shape of the labyrinth was created by mapping the routes that members of the team took from their homes to the BM3 office in Digbeth, part of these routes were then cut out, reconfigured and the angular road layouts softened to better reflect the natural pattern of walking through the city.

Once inside the Urban Labyrinth there are 3 areas for visitors to explore. The journey starts in the largest space where the story behind the labyrinth is explained along with the inspiration behind the design, visitors then move to the second ‘room’ which has been described by guests as a ‘hanging historical chamber’ where photos of Birmingham dating back to 1930 and present hang around you as you meander through. The final part of the labyrinth invites visitors to share their vision for the future of the Birmingham by leaving comments on large scale maps of the city and to connect with BM3 on social media by posing for ‘selfies’ in front of a large cityscape. In keeping with the locally sourced theme, Birmingham based photographers were invited to provide images for the photographic element of the exhibition. Verity Milligan, Tom Bird and James Benwell provided incredible images of the city which were mounted onto the bare brick wall of the BM3 yard, creating a rustic, outdoor gallery.

The exhibition ran for three consecutive weekends during July all of which were a huge success despite the unpredictable British weather. Members of the Urban Labyrinth design and construction teams were on hand to welcome guests and steward the event. On the last weekend BM3 Architecture ran a one off construction workshop for children, giving them the opportunity to build tall structures using only marshmallows and spaghetti. The children’s workshop drew in a large amount of families for the last weekend of the event ensuring that the ‘Urban Labyrinth’ went out on a high.

With the Urban Labyrinth exhibition complete be sure to keep an eye on the BM3 Architecture social media to find out about up and coming events. 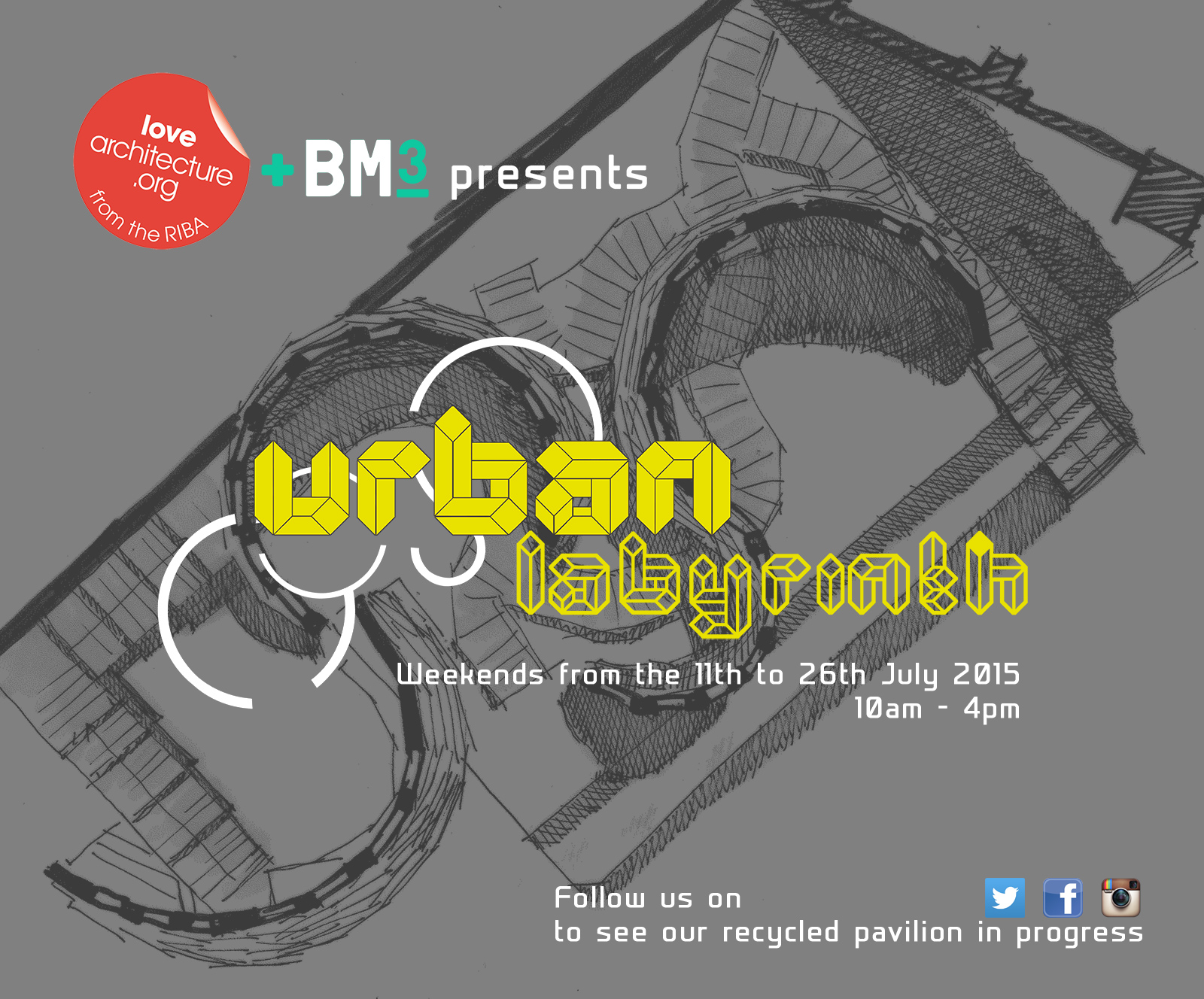 For the 4th year running the RIBA is bringing the ‘Love Architecture’ festival to the West Midlands and this year BM3 Architecture will be part of the initiative.

Throughout the summer, events will take place across the country that will be celebrating architecture and the built environment with the aim to inspire people of all ages. The festival celebrates the architecture of individual buildings as well as streets and neighbourhoods with activities for everyone including exhibitions, workshops, walks, behind the scenes tours and film nights.

‘URBAN LABYRINTH’ by BM3 Architecture is an exhibit and pavilion exploring the changing image of the city of Birmingham and the challenges it faces; through pictorial reflections.

The pavilion will explore temporary, lightweight and adaptable design concepts that are contextual to the surroundings and will be constructed using locally sourced, recycled materials.

The Labyrinth will house an exhibition of photographs from local architects, artists and photographers who have captured the changing nature of the city overtime. The intention of the project is to evoke, in the visitor a vision for the future of their city and facilitate an exchange of ideas through the medium of drawing. Visitors will be encouraged to explore on paper what they perceive the future of Birmingham to be.

BM3 Architecture invites you to come along, discover and draw a utopian vision for your city.

Copies of BM3’s Policies and Certifications are available on request from design@bm3.co.uk